Avid fisherman John Jonelis was enjoying some late night fly-fishing on the Pere Marquette River in Michigan when he had a close encounter with something not swimming upstream.

“I’m casting a fly called a Crystal Bullet with a number 4 hook on a sink tip,” said Jonelis. “This beautiful Chinook Salmon practically bends my number 10 Recon in half but after about an hour, I land it. Al snaps a picture, then all this happens. Me and my salmon get lifted by a glowing ray into some giant saucer-like ship that smells of fish inside.” 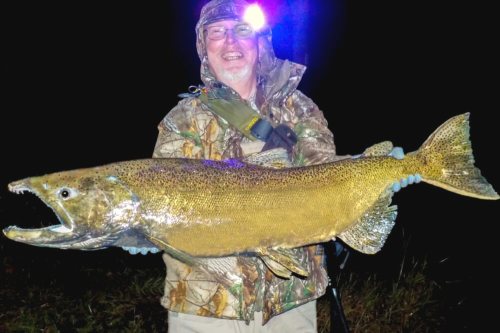 “A tiny man in a silver suit approaches me carrying a long stick with knobs and buttons. He points it at me and the salmon I caught, and babbles something I can’t understand. Then in a flash, I drop like a lead sinker back in the river. But the alien keeps my fish!

“I think those aliens are fishing with some kinda tractor beam.” said Jonelis  “That’s not sporting and it’s against the regs for sure.”

Jonelis was found by his fellow fishermen at 5:00 am the next morning and carried back to Bueter’s Salmon Camp. His fishing partners, Al Faleskin and Bob Paine, were not available for comment.

John Bueter examined Jonelis. “He was soaked through and babbling about losing the big one and space aliens and whatnot, and still trying to cast even though he lost his fly and tippet and was sitting at a picnic table. I’ve seen fishermen act like that before, so I administered a stiff belt of Wild Turkey bourbon. Someone should let those spacemen know it’s catch-and-release around here. The warden will get after them if they don’t throw their fish back. He could confiscate their ship.”

Even after losing his salmon, Jonelis displayed an upbeat attitude. “The fishing’s great—and it’s an easy drive from Chicago!  I’m definitely coming back every year. I just hope those aliens catch their own fish next time.  They shouldn’t steal mine—that’s just not the way fishermen treat each other.” 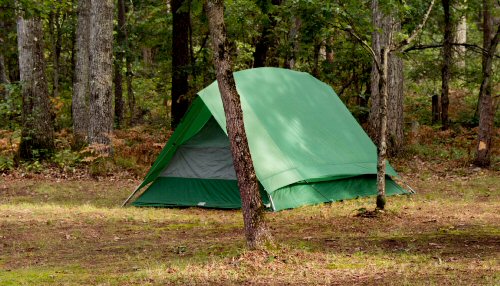 Jonelis refused any more questions and retired to his tent with the bottle of Wild Turkey. “He’ll be okay after he sleeps it off,” said Bueter. “I’ve seen it before. A good fisherman always gets back at it.”

Read next in series – TOO MUCH FUN

Also read – HOW TO TREAT THE OLD MAN

WARNING: Angling is addictive and expensive can be hazardous to your health. Please fish responsibly.

Bueter’s Salmon Camp runs every year, the last weekend of September and sometimes the following weekend too. It’s walking distance from Bueter’s Cloud 9 Resort and an easy day’s drive from Chicago. 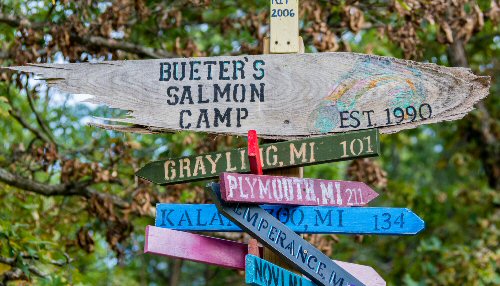 Comments Off on ALIEN ABDUCTS FISH, THROWS FISHERMAN BACK