A dear friend forwarded this powerful article to me.  It shows yet another face of the human condition–one worthy of our constant attention and diligence.  I reproduce it here.  My only addition is the familiar photo of the most brilliant man known to history. 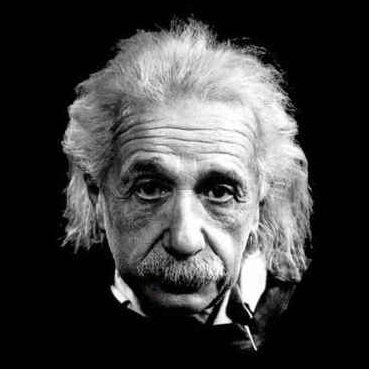 A short time ago, Iran’s Supreme Leader Grand Ayatollah Ali Khomenei urged the Muslim World to boycott anything and everything that originates with the Jewish people.

In response, Meyer M. Treinkman, a pharmacist, out of the kindness of his heart, offered to assist them in their boycott as follows:

“Any Muslim who has Syphilis must not be cured by Salvarsan discovered by Dr. Ehrlich, a Jew. He should not even try to find out whether he has Syphilis, because the Wasserman Test is the discovery of a Jew. If a Muslim suspects that he has Gonorrhea, he must not seek diagnosis, because he will be using the method of a Jew named Neissner.

“A Muslim who has heart disease must not use Digitalis, a discovery by a Jew, Ludwig Traube.

Should he suffer with a toothache, he must not use Novocaine, a discovery of the Jews, Widal and Weil.

If a Muslim has Diabetes, he must not use Insulin, the result of research by Minkowsky, a Jew. If one has a headache, he must shun Pyramidon and Antypyrin, due to the Jews, Spiro and Ellege.

Muslims with convulsions must put up with them because it was a Jew, Oscar Leibreich, who proposed the use of Chloral Hydrate.

Arabs must do likewise with their psychic ailments because Freud, father of psychoanalysis, was a Jew.

Should a Muslim child get Diphtheria, he must refrain from the “Schick” reaction which was invented by the Jew, Bella Schick.

“Muslims should be ready to die in great numbers and must not permit treatment of ear and brain damage, work of Jewish Nobel Prize winner, Robert Baram.

They should continue to die or remain crippled by Infantile Paralysis because the discoverer of the anti-polio vaccine is a Jew, Jonas Salk.

“Muslims must refuse to use Streptomycin and continue to die of Tuberculosis because a Jew, Zalman Waxman, invented the wonder drug against this killing disease.

Muslim doctors must discard all discoveries and improvements by dermatologist Judas Sehn Benedict, or the lung specialist, Frawnkel, and of many other world renowned Jewish scientists and medical experts.

Oh, and by the way, don’t call for a doctor on your cell phone because the cell phone was invented in Israel by a Jewish engineer.

Meanwhile I ask, what medical contributions to the world have the Muslims made?”

The Global Islamic population is approximately 1,200,000,000; that is ONE BILLION TWO HUNDRED MILLION or 20% of the world’s population.

They have received the following Nobel Prizes:

The Global Jewish population is approximately 14,000,000; that is FOURTEEN MILLION or about 0.02% of the world’s population.

They have received the following Nobel Prizes:

The Jews are NOT promoting brainwashing children in military training camps, teaching them how to blow themselves up and cause maximum deaths of Jews and other non-Muslims.

The Jews don’t hijack planes, nor kill athletes at the Olympics, or blow themselves up in German restaurants.

There is NOT one single Jew who has destroyed a church.

There is NOT a single Jew who protests by killing people. The Jews don’t traffic slaves, nor have leaders calling for Jihad and death to all the Infidels.

Perhaps the world’s Muslims should consider investing more in standard education and less in blaming the Jews for all their problems.

Muslims must ask ‘what can they do for humankind’ before they demand that humankind respects them.

Regardless of your feelings about the crisis between Israel and the Palestinians and Arab neighbors, even if you believe there is more culpability on Israel ‘s part, the following two sentences really say it all:

Benjamin Netanyahu: General Eisenhower warned us. It is a matter of history that when the Supreme Commander of the Allied Forces, General Dwight Eisenhower, found the victims of the death camps he ordered all possible photographs to be taken, and for the German people from surrounding villages to be ushered through the camps and even made to bury the dead.

He did this because he said in words to this effect: ‘Get it all on record now – get the films – get the witnesses – because somewhere down the road of history some bastard will get up and say that this never happened’

Recently, the UK debated whether to remove The Holocaust from its school curriculum because it ‘offends’ the Muslim population which claims it never occurred.

It is not removed as yet. However, this is a frightening portent of the fear that is gripping the world and how easily each country is giving into it.

It is now more than 65 years after the Second World War in Europe ended.

Now, more than ever, with Iran, among others, claiming the Holocaust to be ‘a myth,’ it is imperative to make sure the world never forgets.

This e-mail is intended to reach 400 million people. Be a link in the memorial chain and help distribute this around the world.

How many years will it be before the attack on the World Trade Center ‘NEVER HAPPENED’ because it offends some Muslim in the United States?

Thanks Tami.  And to my readers, especially those saved by faith, please pass this on.

Find Chicago Venture Magazine at www.ChicagoVentureMagazine.com Comments and re-posts are welcomed and encouraged.

9 responses to “BOYCOTT WHO?”