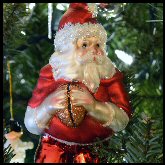 as told to John Jonelis –

Seems to me Christmas is all about givin’ to other people and I say we keep it that way. I love Christmas. Ever’ year I start my celebration on Thanksgiving and don’t take the tree down till January the Fifth. That’s Twelfth Night fer youse guys that don’t know. That night I throw a big party, hire cooks, a piano player, ‘n’ ever’body burns a branch from the tree before they leave.

There’s an outfit right here in Chicago that keeps the spirit o’ giving alive all the yearlong. They find people with talent, creativity, intelligence, hard knocks ‘n’ plenty o’ moxey. Then they pay ‘em to train fer big-time jobs. That’s one o’ the nicest gifts you can give a person with them kinda attributes—a chance to use what they got inside themselves. Think about it—all that potential just waitin’ to burst out so bad a guy could explode.

And the corporations is eatin’ it up, ‘cause they need them kinda people more than anything else, and it ain’t easy to find ‘em. They need ‘em so bad they’ll pay for it in time and money. I think this outfit is gonna be one o’ the most successful self-sustaining social entrepreneurial ventures that ever started in Chicago. They call themselves i.c.stars.

Here I am at their huge TechBash party where I expect to find hoards o’ ravenous, greedy corporate Scrooges. What I really wanna find is a story about giving. The food and bar is open and maybe I take more’n my share of them good things ‘n’ by now I got lotsa Christmas cheer inside o’ me. But hey—it’s a party. I can be just as greedy as the next guy and I’m havin’ such a good time at it.

I hold my MP3 recorder at arm’s length and stick it in the middle of a buncha i.c.stars alums. It’s a weird-lookin’ gadget and these guys freak out like I’m one o’ them Men in Black. I gotta tell ‘em, “It isn’t gonna erase yer memory.” They see I make the movie connection and that brings peals o’ laughter all around. 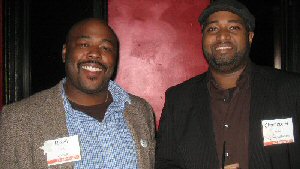 Chris works fer WGN and the Chicago Tribune, which is a helluvalot bigger rag than this one.

“I love doing graphic design for them. It’s great,” he says. “What i.c.stars was able to do was show me the business end. I didn’t know how to market myself, how to present myself—just to be able to look at an interviewer and figure out what they’re looking for in that time. So they teach you how to assess those things very quickly and how to act on the fly. They put you on the spot but you learn how to rebound and jump into position faster than you could before.”

Nik landed a big-time IT job with WW Grainger just a month outa i.c.stars. We hang out a while and I find out he makes Craft Beer. Then he tells me something that grabs my attention:

“Passion projects,” he says. Passion projects are huge. That’s one thing they teach us at i.c.stars. Have a desire to learn technology, but then in addition to that, identify with what your passion is. Understand that you have a civic duty to fulfill—whether it’s from the neighborhood you came from or whether it’s highlighting others that don’t really get the visibility that you get. Have a passion project—have a civic duty. And then be great in technology as well. It’s a combination of the two. That’s what makes i.c.stars special.”

Now THAT—that right there is what I call the spirit o’ giving.  That’s what we need more of.

I talk to one o’ the Big Honcho Sponsors—Jon Mathews from BridgePoint Technologies. (Yeah, he spells his name with one ‘t’.)

“We do a lot with i.c.stars,” he says. “Especially with the interns they take on—teaching them development. We work with a lot of companies who need young developers and need more people going into this avenue.”

So I ask him straight out: “D’ya find these interns come out fluent in programming?”

“Yes, they’re trained very well. It’s amazing what i.c.stars does for those who weren’t brought up in IT. We’ve had positive feedback from clients where we placed them.”

So that’s good news right from the source.

I wanna talk summore to Vera Shabazz. (See Part 1 of this series.) So I hunt till I find her ‘n’ ask just what i.c.stars did for her—personal-like.

“They teach you how to think technically—not just thinking—but thinking technically,” she says. “It’s just a great place to be. It’s a great place to learn. Through i.c.stars, I was able to re-invent myself from being in banking to now working IT at United Airlines. I don’t know where I would be if I hadn’t gone to i.c.stars. I don’t.”

Quashe׳ Granville joins our little circle: “i.c.stars is a place where you can bridge the gap between technology, business, and leadership skills.” That’s a good businesslike description. Just one line. I’m impressed. I drink down the last o’ my Scotch ‘n’ Soda and ask, “How d’they do that exactly?”

Vera smiles. “After the first few weeks of training, the purpose is to do a large project with a major company, build teams and camaraderie, and to get you in the mindset. It’s like a boot camp. Once you’re done here, you can secure a job.”

The music gets louder and I lean close to Vera. “So you do a simulation or some kinda practice project?”

“No, it’s real. When I was at i.c.stars, our company was TTX. You know who they are, right? Well if you ever ride the Metra, those are their cars. The CIO and two others were the mentors that helped us through our project. Their CIO was the one who helped me get my job at United Airlines.

Quashe׳ leans-in closer too, but even in all this noise, I don’t have no trouble hearin’ his deep voice. “Right now, our team is working on a mobile app that’s going to help UL with brand awareness.”

That catches me off-guard. “UL asked i.c.stars to do somethin’ that big?”

“Actually, WE put the project together. UL just told us they needed help with brand awareness.”

“The interns figure out the project,” says Vera. “What is it the company wants? What do they need? From the time you’re doing that project, they’re analyzing you. Asking questions. They want to know how well you handle yourself.”

I study these two. Both hard survivors—both soft hearts. “Sounds to me like a tough kinda program.”

Vera nods. “It is tough. But i.c.stars makes sure about you. If you think about it, they’re putting us back into the community and asking us to give back. If we’re not prepared, then what do we have to give back?

This gal makes a wonderful spokesman ‘n’ she’s a terrific lesson in gratitude—somethin’ most of us just don’t seem wired for.

“I love i.c.stars!” she says. “ Whatever I can do, they’ve got my help. I think all of us who are alums still give back to i.c.stars. We volunteer for whatever Sandee needs.

“I also give back through Virginias House – a non-profit organization, which is for victims of domestic violence. My goal is to provide traditional housing for 1000 survivors and their children by the year 2025. I want to build a facility on the south side of Chicago that will allow them to leave their abusive homes and also stay for a year, getting themselves prepared to move on”.

“Whats the chance o’ gettin’ that off the ground.?”

“We’ve already got the programs together. We already did one function and we’re doing more. Since leaving i.c.stars, we have helped 50 families. They might need food. Their children might need clothes or school supplies. We help them with that as well. We have partnerships from Jewel and Dominick’s. Gift cards. Food. Clothing.”

I ask Vera, “How hard was it to get into the i.c.stars program?”

“The first thing I thought when I did the application process was, ‘What the heck? What is this for? Why do I need to fill out so many pages?’ It didn’t make sense to me. But I think it’s to see how badly you want it. I could have been discouraged and just said, ‘Forget it.’ But just because it was so lengthy, I decided, ‘I’m going to do this and they’re going to take me.’”

“After the application, there’s a newbie puzzle, and that is a real brain twister. Then you go down for the written assessment and the technical assessment. And then once you’re done with that, they call you back for the interview.”

I snag myself a snack from a passing tray and ask Quashe׳, “What’s with all these booths scattered around the place—all them people waitin’ in line?”

“Interns are trying to talk to CIOs,” he says. “Consulting firms too. They’re trying to get their idea out there and CIOs of all sorts are right here to listen.”

“So what about your mobile app?”

“It’s designed for 5-9 year olds to become junior scientists. Kids create an avatar. They’ll see science projects based on fire, water, electricity. Everything about it is going to be virtual. You get to play around with these things and the beautiful thing about it is that when you want to mix two compounds together, you can just shake your phone and you’ll be participating. Let’s say two sets of wires are not UL safe—that’s out of spec. So your avatar goes to touch the wire and gets a shock.”

“Maybe give ‘em a vibration?.”

“We can do that. There are a lot of things we’re going into but at the same time we have to focus on one key area: You know how you always tell your kid, ‘Don’t touch the stove, because it’s hot.’ Well now we have to deal with, ‘Can you touch the stove handle? Is it UL safe? Is it UL approved?’”

“Sounds kinda elaborate as a mobile app. So what’s your personal goal when ya graduate?

“My personal goal is to find a decent company that has a solid culture that will actually cultivate what I already know. Basically somewhere I can grow.

I asks Vera, “When you was at i.c.stars, what was yer favorite part o’ the day?”

“We have what we call High Tea. Celebrities come—we call CIOs celebrities—and they tell us their stories. But first, each team member pours tea for the team member on their left and introduces that team member to the CIO and it goes around the table. We don’t talk about ourselves—we talk about the person whose cup we fill—what he does, what his likes are, what his super thoughts are, what he’s going to do when he graduates i.c.stars and why they should hire him. Just to go through that phenomenon, it will blow your mind. It is just something that you do not get used to. You need to come to see a High Tea for yourself.”

“Hmff.” I stroke my chin to make her feel like I’m thinkin’ real hard about it, but to me it’s a no-brainer. I wanna check the place out anyhow. “Okay, you got me. Lemme know when I can come.”