He continues his impromptu soliloquy. “Why don’t deeze malcontents all move t’ Greece?” Ah, Greece—where socialism is in full bloom and the weather is gorgeous. “Maybe President Elect Trump will offer free one-way luxury cruises to da Mediterranean and make da Greeks pay for it.” Lonagan figures that will make everybody happy.  But then he reflects that Greece is bankrupt. Socialism didn’t work there. 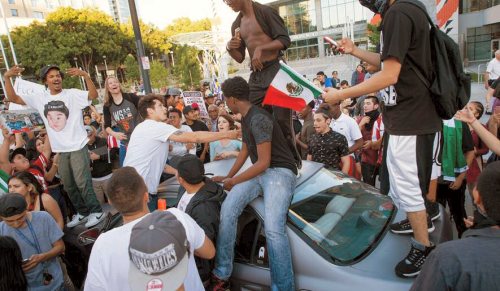 The riots disturb Lonagan because he now sees a political party that generates looters. His own! “Hmmf!”  It shames him. He’s embarrassed for the European decadence of his people. This is not our way. Americans don’t throw temper tantrums after elections. We vote. We accept what happens. We come together. These are principles Lonagan grew up believing.

He pats his bull terrier, Clamps. The dog lets out a long satisfied sigh while Lonagan takes a stiff slug of scotch. “You never worry ‘bout dis kinda stuff, do you Clamps old buddy?” In this election, with a choice between the crass and the criminal, Lonagan never expected a good outcome. In his view, which he loudly stated to everyone that would listen, “Anybody with half a brain knows we’s gonna get one o’ two things—Cleopatra II or Nebuchadnezzar III. I dunno which is worse. So why all da fuss?”

As a practical man, Lonagan figures the real game is to do well no matter who is in office. On the night of the election—during all the hyper uncertainty—when index futures were tanking big time—Lonagan capitalized on the unexpected.  He went Long all he could during the after-hours session on slim capital and crazy margin, using all the leverage he could muster. Now, during the riots, he’s cashing out of those positions to the tune of millions. But what if—

A small tug at his sleeve and he suddenly remembers his duties as a babysitter. He shuts off the TV and takes Jim Kren’s little girl into his arms.

“G’night Uncle Loop”, she says, wrapping her arms around his neck, “I love you,”

“I—uh,” he squeezes out the difficult words, “I love you too, Angelica.  Lemme tuck you in.”

And when he sets her on her feet, she bursts out, “And tell me a bedtime story!”

“But I want to hear what happens to the Dragon Lady and the Big Bad Duck.”

He stares at her good and hard. Precocious little tike. “No, babe, it don’t seem right to—”

Lonagan wipes a hand across his jaw. It’s nine o’clock. Mama and papa are out. He’s supposed to use his judgement in emergencies like this. “Okay, Princess.” He can hardly believe what he hears himself saying. “We’ll do anudder chapter o’ da Dragon Lady ‘n’ da Big Bad Duck.”

Angelica claps her hands and jumps in place, her long curls bouncing on her shoulders. “Thank you, Uncle Loop!”

She calls out, “Clamps!” The enormous bull terrier bounds up the stairs after her.

Lonagan goes over the images of this absurd campaign and pours himself three more fat fingers of scotch. He’s playing with dynamite and curses his lousy imagination—using hardcore news to create a bedtime story—stupid, just stupid. Chicago-style political intrigue on the national stage is a tough lesson for anybody. It’s the wrong material for a youngster. Maybe it’s child abuse. He wishes he never told her that story, but he did and now she wants the rest of it.

He pours more scotch. Maybe, just possibly—if he sticks to the script and keeps the whole thing in a child’s world—it might all turn out fine. All the Lonagans love happy endings. Plunking down his empty whiskey glass, he checks his watch. Five minutes. Showtime. And keep it clean!

Upstairs, Angelica is curled up with Clamps, rubbing the dog’s ears. The animal squeezes its eyes closed in ecstasy and rumbles a soft, deep rhythmic growl. He’s the only dog Lonagan knows that can purr.

Clamps is at Peace – [John Jonelis]

After pulling the covers over those two, he settles his rump on the foot of the bed. “Okay Princess, lemme catch up on da story. Best I can remember, yer at school, it’s recess, ‘n’ yer gonna play soccer. It’s da Jackasses—I mean da Donkeys vs. da Elephants. You’se is picked fer da Elephant team, right?”

Angelica blurts, “I know, I know! That Dragon and Duck! They planned this whole mess together! And now my team doesn’t stand a chance!”

The girl knits her brows while scratching the thick short fur on Clamp’s neck. “I don’t understand.”

“Sure ya do, kid. Da Duck’s a big bully and he’s got dis huge ego, see? C’mon, you know that. Ever’body knows that. So, da Dragon taunts ‘im. Mocks yer team. Calls you a buncha morons. Says she can cheat all she wants. Who’s gonna find out? Yer all trash—nobody’s gonna believe ya. How d’ya feel about that, Princess?”

“Okay, so after all da yellin’ ‘n’ pushin’ around, da Duck gets mad too. Now he turns against da Dragon. He’s gonna fight her now, insteada doin what they cooked up beforehand. He’s too proud t’ quit da team after all da abuse she spits out, so bein’ da biggest, he takes over. And da Dragon Lady is smilin’ da whole time. Ever see dat smile? It’s enough t’ zap yer spine outa joint.”

Angelica sits straight in bed. “But Uncle Loop, that means the Dragon has to play against the Duck. That doesn’t make sense. She would never plan it that way.”

“Ah, Princess, lay back ‘n’ relax.” He tucks the covers under her chin. “Doncha see? She WANTS t’ play against da Duck. She figures he’s her easiest opponent ’cause allota his team won’t play so hard for ‘im.  I mean, plenty o’ kids don’t like dis guy so much.  He’s her handpicked patsy. Has been since day one. She’s so sure she can beat ‘im, it tastes like candy. Ever’body says she can’t lose. She already watched him bust up da udder team ‘n’ now she’s ready fer da killshot. Pick yer opponent.  That’s Civics 401.”

Angelica squeezes out a tear. “So my team loses anyway? This is an awful bedtime story!”

“Don’t cry, Princess.  Stop ‘n’ think! da Dragon’s got a buncha great big weaknesses. Mosta da kids don’t like her so much neither.  And she don’t see what’s about t’ happen ’cause she’s—whadayacallit—a nar-sisist-sisist-sisit.”

The girl just stares at him

“Doncha get it?  Same kinda thing happens in all competitions.  Like when ya play pinochle with yer folks.”

“What trump card does my team have, Uncle Loop?”

“Ah, you figured it out!  You got outrage, anger, drive, determination–stuff like dat!” He throws his arms out in a broad gesture.

Clamps lets out a powerful bark and Angelica strokes the animal’s massive head.  “Everybody is so angry.”

“No, take a look over there, sweetheart. Her team’s all smiles.  They’s so sure.  They just know they’s gonna win.  They’s—whadayacall—overconfident.  It’s da players on yer team is steamin’ mad.  They’s breathin’ smoke.  So what happens when people get all pumped up like that?”

She sniffs. “They fight?”

“Bingo! I seen it happen again and again in sport after sport.  They fight like wildfire!  Ever’body gives a hunert ‘n’ twenty percent.  They win da game!  A surprise victory!  A major turnover!  Somethin’ nobody expects!”

“So you mean that my team wins?”

“Yeah, Princess, you win!  Den da recess bell rings ‘n’ it’s back t’ class.   Look, ya gotta get some sleep, so listen up—lemme give ya da moral o’ da story. Sh— I mean stuff happens. Stuff nobody expects. So’s when you’se is growin’ up, learn t’ expect what nobody expects. Dat’s where ya find success.  Ya get it?”

She shakes her head no, and hugs Clamps tighter.

Lonagan closes Angelica’s door and sits on the stairs. For months he’s heard stupid quote after stupid quote from The Donald. Now the guy’s president elect. So he searches his phone for some quotes from Hillary and comes across a nasty collection that shocks him.

As Lonagan reads more of her words, the invective gets strikingly shrill and profane. Finally he pockets his phone. He refuses to think any more about the foul stench pouring out of Cleopatra’s mouth. 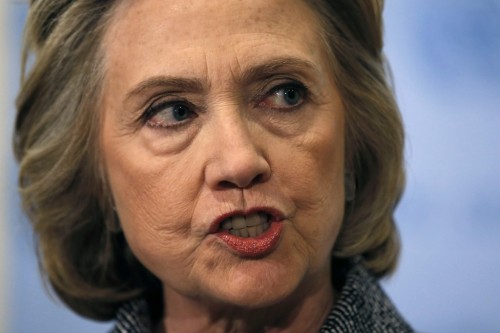 Maybe the country got lucky, maybe not. Lonagan doesn’t know such things.  He believes that every politician, without exception, is a self-serving bastard.  Maybe that’s all we can expect, but at this point, he wishes with all his heart that President Elect Nebuchadnezzar eats his bitter greens and becomes the leader this country needs so badly.

The opinions of Mr. Lonagan and his wild conspiracy theory are not endorsed by the management.  Mr. Kren has been made aware of possible turmoil planted in the mind of his young child.

“THE DRAGON LADY AND THE BIG BAD DUCK”

Comments Off on TRUMPED