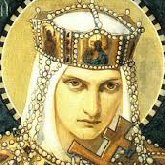 Ever face a crisis situation?  Raw panic?  Of course you have.  We’ve all been burned by miscalculation, greed, and shoddy research.  People have been making the same mistakes for quite a long time and a young woman from the 10th Century can teach us a pointed lesson about the importance of accurately sizing up the competition.

Meet Princess Olga.  She lived in Kiev back in the 900s with her husband Igor, ruler of Kiev, and their young son Svyatoslav.  Igor was leaning on the Drevlians, a neighboring people, for tribute.

The Drevlians decided that killing Igor would be cheaper than paying up, so they assassinated him.  That left Olga, a young widow, as regent for her three-year-old son.

The Drevlians were now dealing with an angry leader that they had badly underestimated.

The Drevlian ruler wasn’t satisfied with merely eliminating the payment of tribute.  He could do even better.  If he married Olga, he’d rule Kiev!  After all, she was a poor widow with nobody to protect her or rule her kingdom.  He dispatched a group of important Drevlians to make the pitch to Olga—something along the lines of, “We know you’re single since we killed your husband, how about you marry our leader?”

Olga’s response was not what they were hoping for.  She buried the envoys alive.

Before news got out about the demise of the Drevlian ambassadors of love, Olga sent word to the Drevlian leader that she accepted his proposal.  However, she said, for her people to accept her remarriage, the wisest and most knowledgeable of the Drevlians must come to serve as an honor guard on her perilous journey.

When these men arrived, she burned them to death.

Undeterred by her delayed arrival and still blissfully unaware of events, the Drevlians send a huge contingent to a feast put on by Olga.  A large number of them became exceeding intoxicated.  Her soldiers then attacked the largely helpless drunks.  Several thousand more Drevlians perished.

Painting by Pieter Bruegal the Elder

The Drevlians finally caught on that Olga was less than happy with them, but by this time she was gathering her army.  Deprived of much of their leadership and a significant chunk of their manpower, things didn’t go well for the Drevlians, and Olga soon besieged their main city.

Sensing doom, the Drevlians tried to negotiate peace. Olga responded that all she required would be three live pigeons and three live doves from each Drevlian household as tribute. (Drevlian families commonly kept bird coops on the roofs of their homes).

The night after delivery of the tribute, Olga’s troops tied a piece of string to the leg of each bird, bearing a flaming material.  They released the birds, all of which immediately flew back to their homes.  Every building in the city caught fire at about the same time.

The Drevlians fled their flaming fortified city into the arms of Olga’s waiting troops.

The Drevlians underestimated their competition.  This is probably why you don’t hear much about them today.

Robert Jonelis is a mathematician and history buff who knows how to tell a good story.  He spends his days programming automated machinery in search of the perfect robot.

This article originally appeared in NEWS FROM HEARTLAND – The Journal of the Heartland Angels.    http://news.heartlandangels.com   Copyright © 2014 John Jonelis